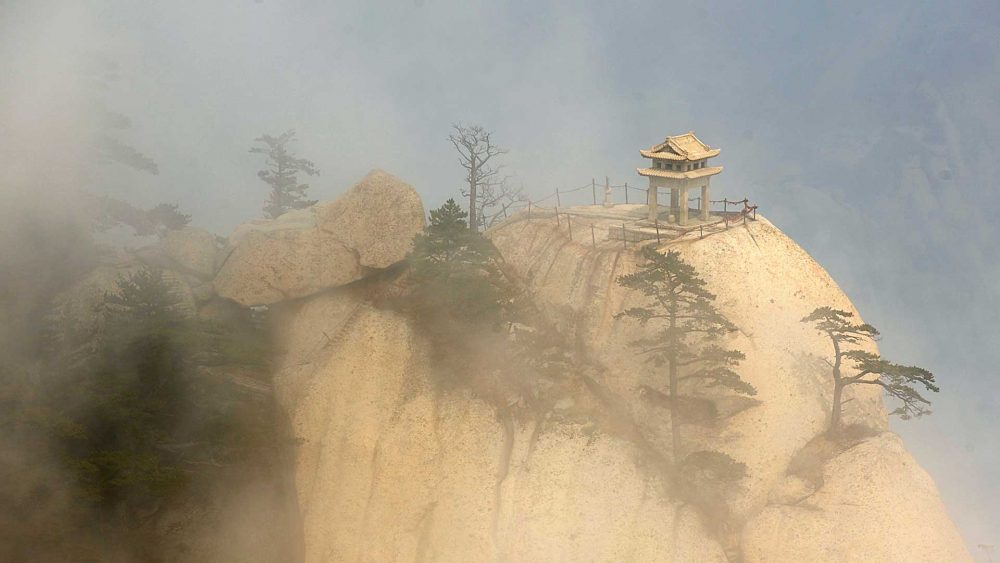 The concept of Qi is central to Taijiquan (Tai Chi) and fundamental to many aspects of Chinese culture, but it is still surprisingly misunderstood in the west. Given the widespread misinterpretations, it’s not unexpected that fruitless debate, as to if Qi exists or not, arises. Why is it fruitless? Because it’s a futile exercise of etnocentrism – judging another culture’s concepts from the standpoint of our own, as if any chosen culture could be the standard one.
Qi is present in the everyday life of chinese culture. It’s part of Chinese language, Taijiquan (Tai Chi), Medicine, sports, nutritonal views, and many other areas. There is, thefore, no question to Qi’s existence, there’s only the question of how we can best translate the concept, not just the word, so we can share Chinese culture’s understanding.

Qi has first been translated to western languages as “energy”. Some might think this is a good translation, others a bad one, and I have changed my mind about this a few times. Chinese language is written by means of images, and the image for Qi shows the vapor arising from cooking grain (rice).
Another popular image for Qi is the vapor rising from a humid forest towards the sky in the morning. The word Qi was used referring to effects of the sky on earth, including in the sense of making metheorological forescasts for crop sowing.
If one reads the Daodejing, it is written:

“The One” means the Dao; “The Two” means Yin and Yang; and “The Three” means Yin, Yang, and the resulting tension between these opposites, which is Qi. “Ten Thousand Things” means everything. The vapor rising from a forest to the sky is a visual representation of the tension between Yin and Yang, of which Earth and Sky are very fundamental images.

In Acupuncture, Qi is related to bodily processes. Balance and imbalance of organ functions is said to be due to lack of Qi, Qi stagnation, and so on. There are pont-choosing system in Acupuncture that take into account the influences of sky on earth (the same ones used for metheorolgy) on the moment of birth to alter the acu-point prescriptions.
Qi is, therefore, a word referring to concepts related very practically to food energy, appearing in the body as muscle power; to subtle body functions related to organs, which can be regulated by needling specific points; and to a kind of natural order in the universe, which is reflected in everything. The meaning is tied to the context.

One might argue that this is too broad a definition, and would be right. In order to make any sense out of this, we must choose a context. There are intersections, but not everything that applies to one context will to all others. We have words like that in english too – take “influence” for example, its meaning can change radically depending on the context.

We’ll focus on the context of Taijiquan (Tai Chi) here. Qi is an omnipresent entity in Taijiquan (Tai Chi). Every student thinks of being able to direct Qi, and multiply his power with that. Many teachers talk about first moving the Qi, and then letting the body follow it. Even when teaching basic Taijiquan (Tai Chi) exercises, we will instruct the students about the direction of Qi flow, and at least tell them if it is going out or coming in to the center. This can make it all the more confusing.

First, we need to settle on a common ground and eliminate fantasies:

If you ask a Physicist, he will tell you that there are only 4 forces in nature: electromagnetism, gravity, and two other that operate only inside atoms. This means that everything in your daily experience is due to electromagnetism and gravity. But gravity is only a significant player if very massive objects are involved – massive like a planet. You can feel gravity between you and Earth, but you can’t feel the gravity pull of a table or a car, it’s too weak. So, all interactions between you and every object (except our planet) are electromagnetic in nature. All you can feel, and do, is simply the electrons on your atoms pushing the electrons of something else away, because they carry the same negative charge.
But you can’t think like that in your daily life. You have to think, let’s take an example, about friction. If you want to buy shoes for rock-climbing, you think, “i need some that are not slippery, some that have a good grip”. You feel the grip the rubber has, you don’t go about doing quantum-mechanics math. Even tough friction is actually electrons bumping, you resort to a higher degree of abstraction and think in terms of friction. We could say that Physics itself builds abstractions on top of simpler concepts: Angular Momentum, for example, can be thought of as the appearence of inertia in a spinning rigid body.

Chemistry is built on top of Physics. It would be impractical – or impossible, today – to calculate all the interactions in a chemical reaction, even tought it’s all quantum mechanics. So, we resorted to creating a higher degree of abstration, we zoomed out a little, and created Chemistry.
Biology is built on top of Chemistry. We wouldn’t be able to describe everything that goes on in a living human using only Chemistry (even tough it is, in principle, possible ), and still have a global idea of how we funtion as an organism. We have to zoom out even more, and see cells, tissues and organs, to understand how a living being lives. It’s all Chemistry, which is all Physics, but Chemistry and Physics wouldn’t give us the picture we need.

At the same time, western culture and science have an ingrained tendency to analyze everything: every process is bronken down to its constituent parts, their function studied, and then it’s all put back together. This is how most of us is taught about movement in school biology: in your arm, the biceps is used to bend the arm, and the triceps is used to extend it. In the leg, the femoral biceps is used to nd the leg, and the quadriceps is used to extend it. This is true, however, only if you isolate an arm or a leg.
Kinesiology is built on top of Biology. We need to zoom out from the tissue level to see how the body moves. However, at the same time we zoom out, we still have that tendency to break the whole down to its parts. So we are more or less stuck with a movement model that takes the constituent parts into consideration – which is fine – but which forgets about the whole. How does each part affects other parts, far away? How is the body’s structure kept during the vast range of motion it is capable of?
Western movement science still doesn’t have a comprehensive answer to these questions. Advancements are being made, specialy on the Anatmony Trains and the Tensegrity fronts, but a complete model has not been proposed yet. When aplying our knowledge to sports, we are still at the “how does this limb move” level.

How to Understand what Qi means

Let’s take a step back and consider the historical context. There are chinese historical documents from around 500 b.C. that tell us about using exercises for health promotion. On the 7th century a.D. medical doctors were creating exercise sets in China, and prescribing them as a means to strenghen or heal their patients.
Chinese culture had a different approach that western. Instead of breaking things down to its parts, the paradigm was that the microcosm was a reflection of the macrocosm. This means that a human being was seen as a wholesome reflection of nature, and even tough studying tissues wouldn’t be a problem in itself, the main approach was to regard the body as a unit – as much as Yin and Yang were a unity, and as much as sky and earth were a unity. Taijiquan (Tai Chi) reflects these views.
The empirical research done was not “how does an arm bend”, but “how do Yin and Yang appear in the body”, and “how do we follow nature, so to move the whole body optimally”. It made no sense to try to analyze, what made sense for Taijiquan (Tai Chi) was to apply the laws of nature, as known at that time, to the whole of the human body.

There is a broader picture here. In order to understand Taijiquan (Tai Chi), western culture would need to zoom out yet again, from the “how does this limb move” level.
When zooming out from Physics to Chemistry, we needed a new concept, chemical reactions. The we needed another new concept, cells; and then we needed tissues and limbs. At the same time, we needed, to be able to operate in our daily reality, to come up with concepts more akin to our daily experience: we came from electromagnetism to friction, and muscle force.

With very specialized training, and with enough time in it, anyone is able to develop a very unique feeling for how to move the body in the special way that Taijiquan (Tai Chi) prescribes. I’d say that this feeling is a special development of proprioception. We call this very real felling, which is part of a Taijiquan (Tai Chi) student’s daily reality, Qi. It is as real as friction, or as muscle force.

Not your average high school test

You might be thinking, “quantum physics for muscle movement, that’s quite a stretch, get real and talk about the mechanics”. You are right. It’s necessary, tough, to remind most people that the Physics they are acquainted with is high-school level, and the applications taught at that level assume huge simplifications. Almost everything a non-professional learns, assumes rigid or at least perfectly elastic bodies, and no energy dissipation through heat. Forces are exerted by cables that suffer no deformations, and are exerted on unidimensional points. They are often linear.
Nothing like this happens in the human body, specially not during Taijiquan (Tai Chi) practice. The “cables” exerting force suffer deformation – which in turn change their capabilities – all the time, are made of materials which properties are not uniform (muscles, tendons and sinews), the forces have spiral components, they are exerted on irregular surfaces of very irregular bones, the bones themselves are not perfectly rigid if cartilage is involved. No joint is a perfect hinge – there’s always some room for pronation however small. And so on. Finally, the body is anything but perfectly elastic, it’s dissipating energy as heat all the time.
Using high school level assumptions for the human musculoskeletal system, and then trying to discuss the refined results of milemnia of empirical experience condensed into Taijiquan (Tai Chi) is, I am sorry to say, not a serious approach. It can only yield inconsistent results.

There is no need to believe in myths, nothing is thought to be defying natural law. On the other hand, for a skilled Taijiquan (Tai Chi) practitioner, the experience of Qi is as real as that of muscular forces.
During Taijiquan (Tai Chi) practice, if it helps you, you can imagine Qi as being some fluid or gas in your body, there’s no harm in that. Just keep your mind focused on practicing the causes, not in looking for effects, specially not what you’d believe are “Qi sensations”.