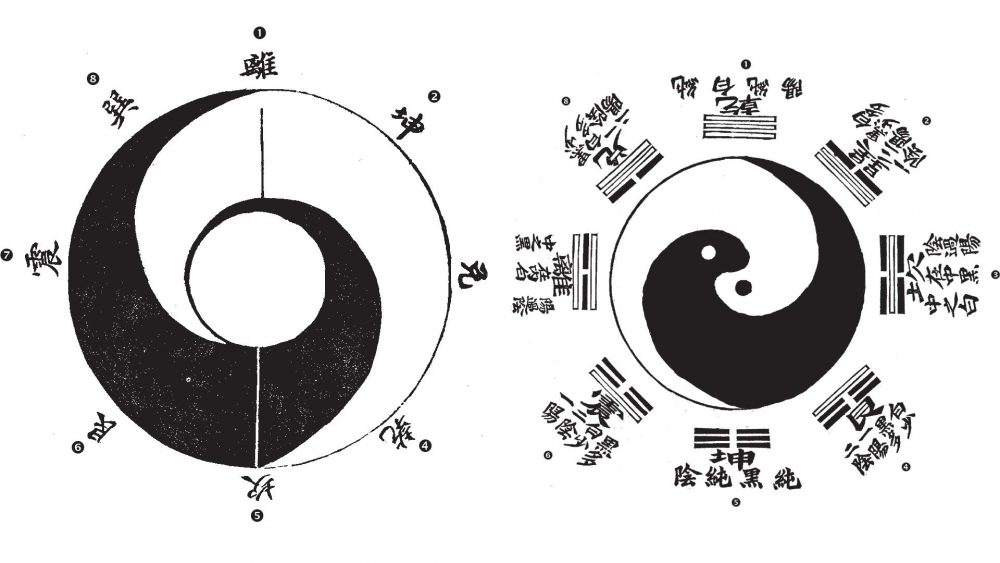 It can be argued that the Yin and Yang concept is the most fundamental idea in Chinese Culture, and also in Taijiquan (Tai Chi). There are archeological findings that point to the existence of this idea in chinese prehistoric times: turtle shells were heated on fire, and the resulting cracks would be interpreted to be either weak (⚋) or strong (⚊), meaning Yin or Yang. This is the origin of the chinese oracle Yi Jing (I Ching), or Book of Changes.
The writen ideograms Yin (阴) and Yang (阳) originally refered to the less and more lit sides of a mountain, respectively. In the northern hemisphere, in latitudes above the Tropic of Cancer, the sun will never be in the zenith, not even in the summer solstice. This creates a clear difference between the northern yin side of a mountain, which gets less sunlight because of the greater angle of incidence of the light from the sun, and the yang southern side of the mountain, which gets more sunlight. The yin side will be more humid, have less life and movement, and be colder than the yang side, which is warmer and has more life and movement in it.
The meaning of the words Yin and Yang were expanded with time to encompass a wider gamut of phenomena, and the words eventually became concepts useful to describe almost everything. Nature is described as being the result of the interaction of two forces, Yin and Yang, which have four basic characteristics that every Taijiquan (Tai Chi) student should be aware of:

Ying and Yang are oposing forces. Yang is expanding, hot, light, and moving; Yin is contracting, cold, dark and static. There’s no moral connotation to them, there is no good or bad force, they are just like fire and water or like day and night. In Taijiquan (Tai Chi), this concept is first noticed as the opposition of light and heavy.

Just as there’s no day without night, and no shadow without light, there can be no Yin without Yang and vice-versa. It is impossible to separate them: if you were to break down a pair of yin and yang things, two new pairs would appear. Take a lake for example: one could say it is yin because it’s made of water only, but the surface would be yang and the depths would be yin, then. There is no monopole. The most known application of this idea in Taijiquan (Tai Chi) regards avoiding the mistake of double weight, but Taijiquan (Tai Chi) applies this in many levels: there’s always Yin inside the Yang, and Yang inside the Yin.

Yin and Yang alternate in time – as one is growing, the other one is lessening. Imagine day and night as being made of so much light and so much darkness. Now, at 6am, there’s 50% of each, and as time passes Yang grows and Yin lessens, until we get to noon. This is very evident in Taijiquan (Tai Chi) movement, and in the constant alternation of Qi coming in and going out promoted by Taijiquan (Tai Chi).

And when we get to noon, what happens? When Yin or Yang get to their peak, they generate their opposite at that very moment. Noon is the time when night is born, and midnight is the time when the day is born. This is a necessary consequence of the previous features, so that Yin and Yang are never at precisely 100%. Silk Reeling shows us how this happens all the time in Taijiquan (Tai Chi).

This brings us to the subject of how to apply the Yin and Yang concept to our bodies. When Taijiquan (Tai Chi) was created, this knowledge had already been established for more than two thousand years by Chinese Medicine.