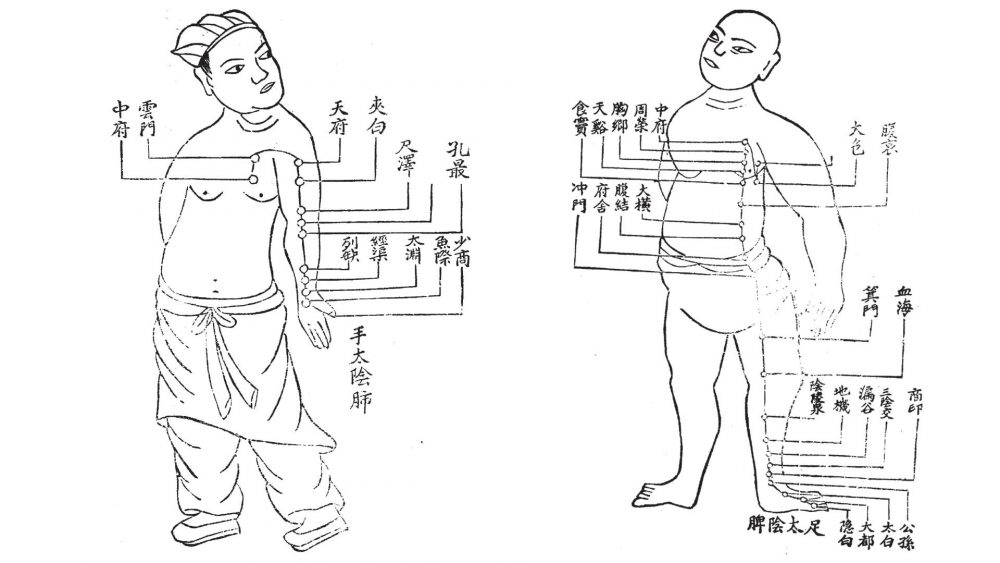 The images above are old maps of Acupunture channels, also known as meridians. These images are in the Illustraded Cannon of Chen Family Taijiquan (Tai Chi), the manual used by the Chen clan to study the theory writen and passed down by their ancestors. What are Acupuncture maps doing in a martial arts manual? Is Chinese Medicine theory important for Taijiquan (Tai Chi)?

Yin-Yang in the body

Taijiquan (Tai Chi) was created in 1644. By that time, Acupuncture had been around for at least three thousand years, and the first classic on Chinese Medicine had been writen for two thousand years. Knowledge about how Yin and Yang are reflected on the body, and how this determines its workings, was solidly established. Someone that devotes his life to the study of the body – like the creator of Taijiquan (Tai Chi), Chen Wangting – would know far more than the average person, just like a Physical Therapist today knows far more about joints and muscles than the average patient.
How does Acupunture see the body, then? The upper part is Yang, the lower part is Yin. The back is Yang, the front of the body is Yin. The outside and the extremities are Yang, the inside and the center is Yin. So the hands and feet are Yang in relation to the hips and belly. The arms are Yang and the legs are Yin. The skin is Yang and the bones are Yin. If you look at a Taijiquan (Tai Chi) master demonstrating, with some practice you will be able to see that his body perfectly complies with these norms.

The Channel Theory in Acupuncture states that the body is mainly irrigated by energy (Qi) carried by 12 main channels, mirrored on both sides of the body, and two extraordinary central channels, one on the front and one on the back of the trunk. These are the main channels, which are directly linked to the organs and viscera. There’s also a huge network of secondary channels, among which our main interest is on the muscle-tendon channels. These are basically the pathways of the muscles surrounding and along the main channels.
In Taijiquan (Tai Chi), the body should be aligned according to the channels. It takes an enormous precision of posture corrections and individual training to teach your body how do this during the Taijiquan (Tai Chi) forms.
The formal way to state this would be: there is an optimal alignment of the body which is the reason why the Acupunture channels have their paths as we know them, and one should conform to this alignment during Taijiquan (Tai Chi) practice.
The logic result is that when the body is positioned according to this natural alignment, the transmission of energy and power is optimal.

Taijiquan (Tai Chi) theory describes the body as being linked in six ways, three of which related to specific joints. These are the Waisanhe, or Three External Harmonies: shoulders and hips are connected, elbows and knees are connected, and hands and feet are connected. Waisanhe is the first goal for a Taijiquan (Tai Chi) student.
In Acupuncture theory, it is said that the better doctor treats disease distally. A good Acupuncturist will not needle the knee if the patient has knee pain, he will (in most cases) needle the appropriate points on related channels in the elbow. The patient has no knowledge about Waisanhe, but gets better anyway, because the links are natural to the body. What we do in Taijiquan (Tai Chi) is learn how to stand and move according to them.