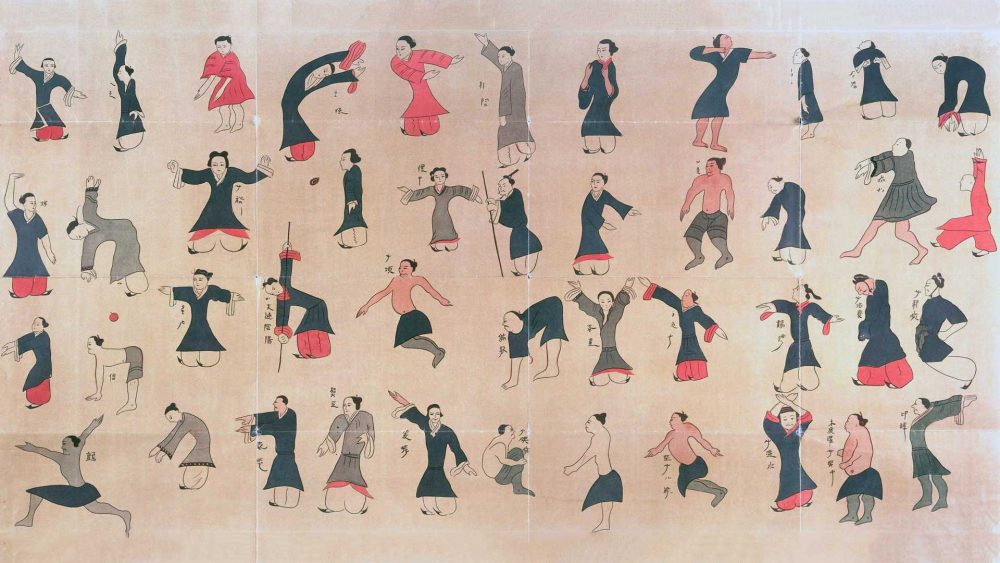 How is Qigong included in Taijiquan (Tai Chi)? Gong means work, and Qi has several possible translations, among which good ones would be breath and vital breath. The most popular translation is undoubtedly “energy”, which is not a bad one as long as it isn’t mixed with the concept of energy in Physics. Qigong literally means “work on the vital energy.” The term Qigong can then be applied to any exercise aimed at influencing the circulation of vital breath or energy in the human body, and thus to Taijiquan (Tai Chi).
In ancient times Qigong has received many different names, such as tuna (to expire and inspire) and daoyin (to induce and lead qi). The image above is a reconstructed silk scroll named “On Quitting Food and Feeding on Qi” from the Mawagdui excavated thombs (3 BC), depicting a Qigong set.

From the time of the Yao ethnic group, it was known that the dance could be useful to strengthen health. In the chapter entitled “On the Ancient Music” of Annals of Autumn and Winter of Lu, one reads:

Yin tends to stagnate (…) and accumulate in the depths of the body, (…) muscles and bones tighten and shorten and can no longer extend properly, so dance is created accordingly to remove stagnation and obstruction.

Over time, dances evolved into physical exercises and breath techniques.
There are inscriptions from Zhou dynasty about Qigong on copper objects, and Laozi writings there’s mention of respiratory methods.
The Neijing Suwen and the Treatise on Febirle Diseases by Zhang Zhongjing describe Qigong methods for health. Since then, renowned physicians such as Sun Si-miao, Wang Tao, Li Shizen and Wang An have mentioned and created Qigong exercises.

There are dozens diverse Qigong exercises. When starting to practice Qigong, the first step is to define the desired goal. Qigong exercises can be seen as belonging to three non-exclusive cathegories: therapeutic, martial, and religious Qigong. One must keep in mind that this division is artificial and sometimes arbitrary, as many exercises can be used for more than one purpose, and there is a lot of crossover. Taijiquan (Tai Chi) is a fine example of this, as it has both therapeutic and martial applications.
Therapeutic Qigong aims to improve health either by treating or preventing a disharmonies. Some examples of Chinese therapeutic exercises are the Eight Brocades and the Six Sounds. Martial Qigong aims to strengthen the practitioner to allow him to receive impact with as little damage as possible, and to strike with maximum power and effect. Two famous examples are the Iron Shirt and the Iron Palm. Religious Qigong aims to train the practitioner’s mind to achieve states of concentration necessary for Meditation, and to provide the physical and energetic conditions for these states to be attained. Standing Meditation is a fundamental exercise in Taijiquan (Tai Chi).
Qigong exercises may employ visualizations, direction of mental attention, and respiratory control. These techniques are used in various combinations at varying degrees of intensity, and may or may not be combined with physical movements. In Taijiquan (Tai Chi) we study the circulation of Qi during the moments, but we do not employ visualization techniques, because Taijiquan (Tai Chi) emphasizes naturalness.

It is essential to understand, before embarking on the practice of any kind of Qigong, that some might not be recommended for a given individual, and that others, if not taught with much precision and care, could even cause harm. On the other hand, many exercises can be practiced freely without special care.
Iron palm Qigong, for example, can lead to tendon and Liver Qi damage, and there are important measures to avoid them. Some martial Qigong exercises had the sole purpose of making a fighter quickly efficient, so they didn’t include considerations to maintain the practitioner’s health in the long run.
Even therapeutic exercises such Six Sounds Qigong can cause problems. Grandmaster Chen Xiaowang, in teaching this exercise, alerts students about the accuracy needed to reproduce the exact tone of each sound, otherwise it could create imbalances in the organs rather than regulating their functions.
The Eight Brocades Qigong is a simple and popular exercise in China, suitable for use as a public health instrument, because it is easy to perform and widely adaptable to each student’s fitness level.
Taijiquan (Tai Chi) is believed to be a very safe form of Qigong practice, provided your teacher is knowledgeable enough to adapt practice to your fitness level.

Taijiquan (Tai Chi) didactics include promoting the free flow Qi. It can be said that Taijiquan (Tai Chi) includes Qigong. Until the 18th generation of the Chen family, Taijiquan (Tai Chi) Qigong was learned almost solely within form, through long years of exhaustive repetition, until the principles of Qi circulation became clear naturally. Grandmaster Chen Xiaowang, taking into account most student’s difficulties in implementing such an intensive practice, modernized the formerly spartan didactic and compiled the basic exercises of Zhanzhuang and Chansigong. These are Taijiquan (Tai Chi)‘s Qigong exercises. The principles learned from these exercises should be present throughout the practice.