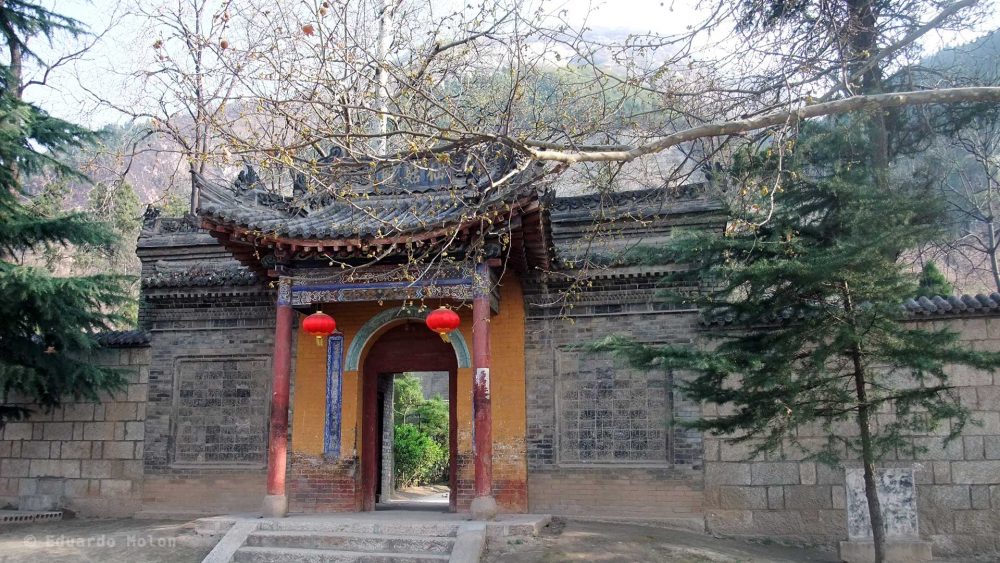 After we visited the Shaolin Monastery, we took the train to Huashan. The high-speed train took just over two hours to get to the little town at the mountains’ foot. The town exists almost only because of the Yu Quan temple, and of the famous mountain range where the Taoist sages took refuge to live in seclusion and meditation. We practiced Taijiquan (Tai Chi) inside the temple’s inner court. The curriculum was intentionally the same as the one covered by the seminar with Grandmaster Chen Xiaowang – Laojia and Xinjia forms – however, the teaching focused on posture correction: during the form, Jan Silberstorff would tell the group to stop and hold the posture, and would correct each one personally. This is perhaps the most important training in Taijiquan (Tai Chi). The training took place in the inner court of the Jade Fountain temple, an area to which tourists have no access, thus a calm and quiet one. There couldn’t be a better place to practice at the foot of the Huashan mountain range.
Besides the posture practice and refining the Taijiquan (Tai Chi) forms we were taught in Chenjiagou, we also had lectures on Taoist filosophy, and detailed explanations on the path to be followed when practicing sitting meditation. The sitting meditation practice was right in the beginning of the aftenoon, when we would go to the monastery’s (not the temple’s) private court, were the monks themselves meditate, an even more secluded area to which we were admited.
After all 3 days of Taijiquan (Tai Chi) practice, the reward was climbing the Huashan peaks. One can walk up the way, as there’s a huge stairway that goes through the valleys in the mountain range. However, the climb would take 6 hours if one were in great physical shape and didn’t stop for rest. As our legs were exausted by Taijiquan (Tai Chi) practice, we chose to use the cablecar through the same valleys, up to the final stop at the lowest peak. The trekking trail among the five peaks starts where the cablecar stops, and takes 3 to 4 hours. The mountains are splendid, but what causes the deepest impression is thinking that the Taoist hermits of old would climb them on foot, with no comfort measures, to live up there in meditation. There is a small temple up there to honor them nowadays.