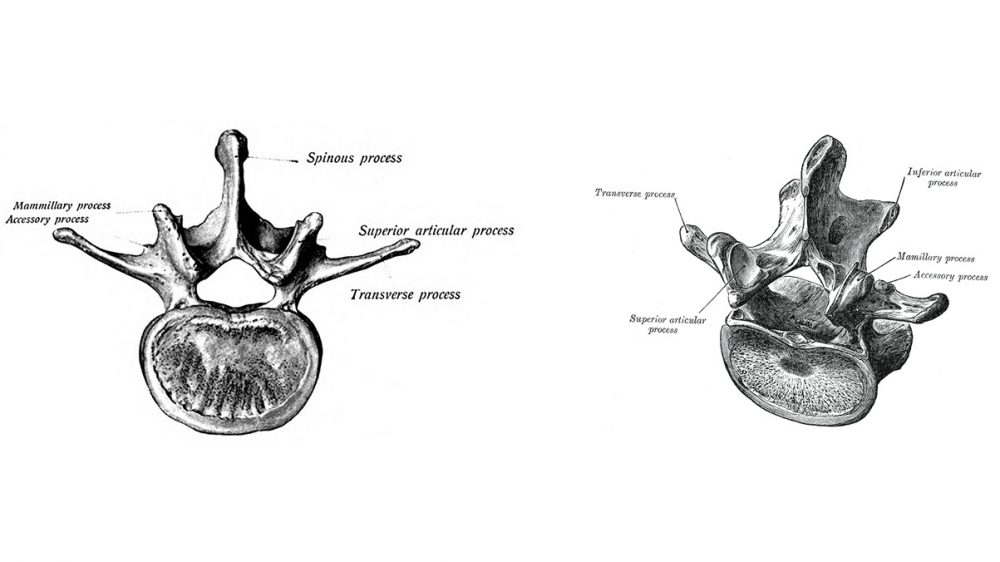 The shape of the human spine during Taijiquan (Tai Chi) is one of the most confusing concepts when one starts learning. The confusion is heightened by myths about energy circulation, lack of basic anatomy knowledge, and not understanding the basic principles of Taijiquan (Tai Chi).
In a nutshell: the physiological curvature of the spine must be respected during of Taijiquan (Tai Chi) practice. It is plain wrong to try to make the spine, or part of it, straight.

Anatomy of the spine

The human spine has four physiological curves: cervical lordosis, thoracic kyphosis, lumbar lordosis, and sacral kyphosis. Every healthy person has these curves from a certain age on. You aren’t born with them, they settle down some time after the child has learned to walk and has adopted the upright posture.

The vertebrae themselves are classified according to their main characteristics, which are a function of their position in the spine. For example: the vertebrae have two lateral “arms,” called transverse processes. At the end of these processes are the articular facets, which articulate with the same facets of the vertebra above and below. If you would open your arms to the sides, your hands are the equivalent of the articular facets. The angle of the facets varies depending on the position of the vertebra in the spine (it’s as if you turned your palms a little up or down). This alone would be sufficient to demonstrate that each vertebra has a precise position and shape according to the spine’s physiological shape, which has developed for millions of years until arriving at the present form.
The vertebrae also have a long protuberance backwards, called the spinous process. This is what you see when you look at a person’s spine from behind. The spinous processes leave each vertebra at a specific angle, which varies with the position of the vertebra in the spine. The vertebrae stack and fit perfectly, and the spine has a natural shape and curvature.

When someone says, “My doctor said that I have lordosis”, this person actually means he has hyperlordosis (usually lumbar). Every human being has lordosis, as explained above.
There are two simple deviations of the curvatures of the spine: excess curvature (hyperlordosis or hyperkyphosis), and rectification of curvature. There are also more complex deviations. Any Orthopedist or Physical Therapist will tell you that rectification of a spinal curvature is a deviation, something that is not healthy and requires treatment, often with mobilization exercises overseen by a professional.

Shape of the spine during Taijiquan (Tai Chi)

Taijiquan (Tai Chi)’s approach is simple: it respects the spine’s natural curvatures. Notice that the instructions for the correct posture say “keep the body straight”, and not “keep the spine straight”. Keeping the body straight means not leaning forward or backward, either with the whole body or with a part of it.
There’s a widespread myth about energy circulation that says the spine should be straight. What I explained about the vertebrae and the spine’s natural shape should be enough to dispel that. The spine should be erect, not straight. Erect spine simply means keeping upright, not leaning. It does not mean one should create undue tensions and fight nature in an anti-physiological posture.

The fundamental organizing principle in Taijiquan (Tai Chi) is naturalness. Therefore, the physiology and natural shape of the spine must be respected. For the spine to be in its natural condition, the hips must be positioned correctly.