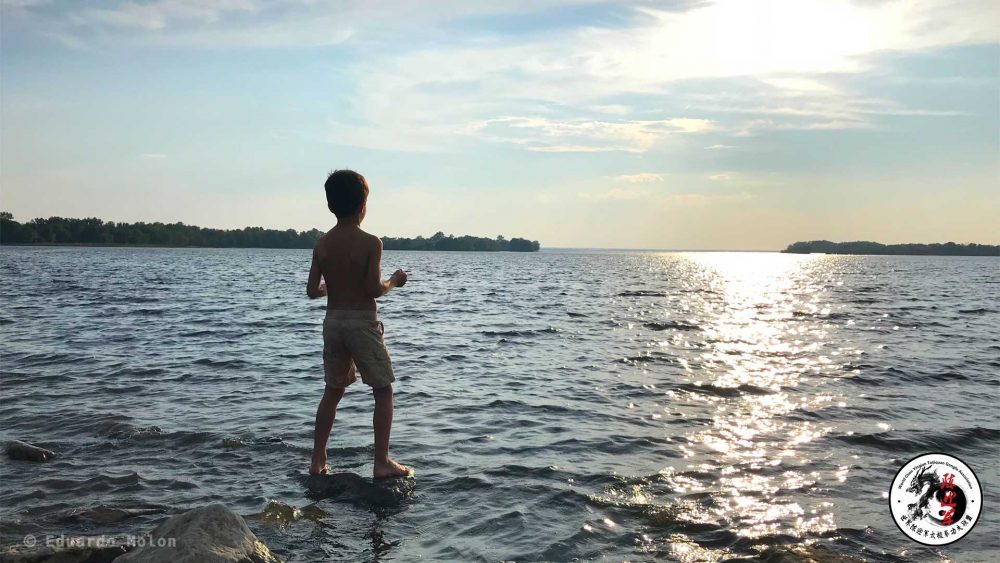 Meditation is a natural state of human mind. Somehow we lost most contact with it – maybe when mankind slowly developed culture, maybe because of our rushed modern lives. Conversely, some cultures devised ways to keep in touch with this quiet and nourishing state, and as our society changes we feel a greater need to compensate the unending rush with inner peace and calmness. Taijiquan (Tai Chi) is one such way.
There are many techniques to guide your mind towards meditation, and Taijiquan (Tai Chi) has its own. Being used to constant overstimulation, our brains continuously produce thoughts, with which we identity and try attach to. Our thoughts are ever-changing, so trying to attach to them causes restlessness and anxiety. Thus the first step towards meditating involves giving the mind one single, seemingly unchanging object on which it can rest. This is called concentration on one point (or thing, or object). The object of concentration may take very diverse forms: one’s breathing, one’s posture, a Koan in Zen Buddhism. Once the mind reaches the state of concentrating on one point, the point is surreptitiously removed, and the mind might stay in a state of concentration without an object. One would have just “fooled” his own mind into meditating, if this is done.
This is, on one hand, only the initial state of meditation, and the path goes way deeper than it. There are huge treatises written by ancient sages on the progress of it. On the other hand, being able to concentrate on nothing is a great achievement. When most people say they are meditating, they are in fact trying to get to this first stage.

Taijiquan (Tai Chi) has its own way of getting you to meditate. The first step is the object on which we concentrate – that is a static body posture. Grandmaster Chen Xiaowang has systematized Taijiquan (Tai Chi)’s didactic, and we use a Qigong exercise called Zhanzhuang, or Standing Post. In the first classes the teacher will say a standard set of instructions, found by the Grandmaster to be the most effective to guide the exercise. These instructions are not enough, but they are necessary for the Taijiquan (Tai Chi) student to understand what is going on. The teacher then corrects the students’ posture, so to achieve a more correct alignment.
The student, then, has to do nothing. That is the hard part, there’s actually nothing to be done. the student should keep the posture, and while not moving at all, relax his body and his mind, and let go. When not interfering, and keeping a well-aligned posture as set by a good teacher, the student’s body will slowly come to adhere to the natural laws of Yin and Yang which Taijiquan (Tai Chi) follows. What we call the Yin, or coarse part of energy, which was scattered all over by chaotic movement in an unbalanced posture, will settle down and deposit in the lower part of the body. The student can feel his legs heavy, and then burning, and the feet will seem to be planted on the ground. As long as there isn’t pain, the burning and tiredness in the legs are normal.

As the Yin energy settles in the lower parts, what remains on the top of the body is emptiness. This is naturally induced meditation.

The object of meditation, during Tai Chi’s Zhangzhuang, changes with the years of practice. As a beginner, the Taijiquan (Tai Chi) student concentrates on keeping the posture static, and this is hard enough already. The corrections a good teacher gives will change the mechanics of the body, and developing awareness of how to use the muscles in a new way is a big job. After this is done, the concentration should gradually change to the Dantian, for which there’s a precise technique. When the meditation progresses, silence will set in, and then it becomes very pleasurable.